Part IV – Start at the beginning with Part I

As the first team of architects to work for TWLER.com, we started mapping out the current situation and planning for the future. ATG was the base eCommerce engine and Oracle the RDBMS. Some attempt to provide enterprise services had been undertaken in the past and tax, inventory and payment had all been removed from the ATG codebase and were now called as enterprise services. There were a number of other integrations but these were the main services that caused issues in the digital world due to the disconnect in service levels that were present in the TWLER (The Worlds Largest Electronics Retailer) environment.

The basic architecture of where we started is below, I take no responsibility for the IT side of the architecture: 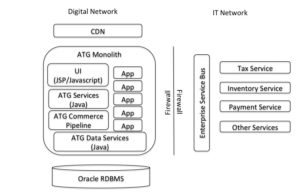 It’s worth mapping out the organizational structure to start to understand the additional frictions present in TWLER’s attempts to run a digital eCommerce system.

The Digital teams were separated out from the IT teams many years ago and had remained in that state.  Digital was viewed as unimportant since stores drove the revenue, Dotcom was a sideline play, even in 2010.  Digital was run like a business and software development was matrixed out to the IT team. The Digital team had taken over its own operations at some point because the IT teams were unable to support 24×7 operations in their model. There were dotted lines between the Digital VP Operations and the IT VP Digital Portfolio, as well as between the Digital Chief Architect and IT Senior Director Digital.

The Business VPs in the Digital team drove the business projects, with input from the wider enterprise business teams in marketing and merchandising. Between the Digital Business and IT was a Business Relationship Manager, who was supposed to translate the business asks into IT requirements. The IT requirements were then shipped off to an enterprise integrator to spin up a new team and deliver the projects. Your success varies.

In addition, internally to the Digital team was an innovation team that had spun up a completely separate Mobile site on ATG, and managed the Mobile Apps. This team was quite clear in their goals to replace all of Dotcom with their mobile site at some point in the future. So now I knew that there were two teams with the goal to replace the main www.TWLER.com eCommerce site.

Finally, there was the Senior Director of Digital in the IT team who was mainly responsible for hiring Accenture to manage projects, and WiPro/TCS to execute projects. This was a very important role as someone had to manage our vendor partners and ensure quality delivery (since I can’t get sarcasm across in writing, read this last line with as much sarcasm as you can imagine). This Senior Director also had plans to rewrite the Dotcom site, he had not gained support from the Digital VPs because they were extraordinarily unhappy with the quantity and quality delivered thus far.

To recap, in the first six months at TWLER I learned that there were at least three teams who felt they were responsible for rewriting TWLER.com. Additionally, the software development on the ATG platform was spread across multiple divisions, multiple vendors and multiple countries. All features were added by project teams who appeared when the money started, and vanished the second the money stopped, all support fell to the Digital VP of Operations. This VP was forced to contend with the mess of code and integrations that 1000s of developers were contributing to every day. I finally understood why she had moved forward with hiring her own team to rewrite TWLER.com. We owned the codebase but lacked capital, in year one we had $7M to get the team started. By the time 2011 rolled around, that amount was cut back to $3.5M.